“Gun control is not about guns. It’s about control.” — anonymous 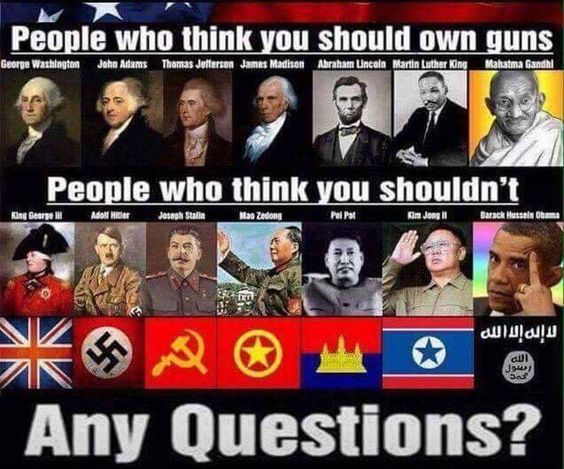 For the Right to Bear Arms

“Among the many misdeeds of British rule in India, history will look upon the Act depriving a whole nation of arms as the blackest.” [ref] — Mahatma Gandhi

“[It is] a chimerical idea to suppose that a country like this could ever be enslaved … Is it possible … that an army could be raised for the purpose of enslaving themselves or their brethren? or, if raised whether they could subdue a nation of freemen, who know how to prize liberty and who have arms in their hands?” [ref] — Theodore Sedgwick

“Before a standing army can rule the people must be disarmed; as they are in almost every kingdom in Europe. The supreme power in America cannot enforce unjust laws by the sword; because the whole body of the people are armed, and constitute a force superior to any band of regular troops that can be, on any pretence, raised in the United States.” [ref] — Noah Webster

“Guard with jealous attention the public liberty. Suspect everyone who approaches that jewel. Unfortunately, nothing will preserve it but downright force. Whenever you give up that force, you are inevitably ruined.” [ref] — Patrick Henry

“[The Constitution should] be never construed to authorize Congress to infringe the just liberty of the press, or the rights of conscience; or to prevent the people of the United States, who are peaceable citizens, from keeping their own arms.” [ref] — Samuel Adams

“Besides the advantage of being armed, which the Americans possess over the people of almost every other nation, the existence of subordinate governments, to which the people are attached, and by which the militia officers are appointed, forms a barrier against the enterprises of ambition, more insurmountable than any which a simple government of any form can admit of.” [ref] — James Madison

“To disarm the people; that it was the best and most effectual way to enslave them.” [ref] — George Mason

“The supposed quietude of a good man allures the ruffian; while on the other hand arms, like laws, discourage and keep the invader and plunderer in awe, and preserve order in the world as property. The same balance would be preserved were all the world destitute of arms, for all would be alike; but since some will not, others dare not lay them aside … Horrid mischief would ensue were the law-abiding deprived of the use of them.” [ref] —Thomas Paine

“To preserve liberty, it is essential that the whole body of the people always possess arms and be taught alike, especially when young, how to use them.” [ref] — Richard Henry Lee

“If the representatives of the people betray their constituents, there is then no recourse left but in the exertion of that original right of self-defense which is paramount to all positive forms of government.” [ref] — Alexander Hamilton

“My excellent colleagues have forgotten these bitter lessons of history. The prospect of tyranny may not grab the headlines the way vivid stories of gun crime usually do. But few saw the Third Reich coming until it was too late. The Second Amendment is a doomsday provision, one designed only for those exceptionally rare circumstances when all other rights have failed. A free people can only afford to make this mistake once.” — Alex Kozinski

“How many of you would put in front of your house a sign that says gun-free zone?” — Kenn Blanchard

“The framers gave us the Second Amendment not so we could go deer or duck hunting but to give us a modicum of protection against congressional tyranny.” — Walter E. Williams

“As we enter the 21st Century, rates of taxation have reached oppressive levels. To statists (who seek only to expand government power), growing resentment on the part of people who work, produce wealth, and pay oppressive taxes presents a serious threat. Disarming ordinary Americans who will be called upon to pay ever higher taxes is seen by them as necessary to minimize that threat.” — Howard J. Fezell

“Laws that forbid the carrying of arms… disarm only those who are neither inclined nor determined to commit crimes… Such laws make things worse for the assaulted and better for the assailants; they serve rather to encourage than to prevent homicides, for an unarmed man may be attacked with greater confidence than an armed man.” — Cesare Beccaria

“Never Forget, even for an instant, that the one and only reason anybody has for taking your gun away is to make you weaker than he is, so he can do something to you that you wouldn’t allow him to do if you were equipped to prevent it. This goes for burglars, muggers, and rapists, and even more so for policemen, bureaucrats, and politicians.” — L. Neil Smith and Aaron Zelman

“It is evidently clear that gun control does not hinder the determined murderer from achieving their goals, whether that is at a school, a church or synagogue, or a movie theater. Thugs in Chicago do not care about the laws on the books nor did Harris, Klebold, Lanza, Dorner, Holmes, Cho, Hasan or any other of the criminals hell bent on murder.” — Evan Todd, first student shot in the library during the Columbine massacre

“They who can give up essential liberty to obtain a little temporary safety, deserve neither liberty nor safety.” — Benjamin Franklin

“An armed citizenry is the biggest threat and deterrent to the regimes and false utopian schemes hatched by elitist nascent tyrants and despots to gain privilege and power over the masses.” — Truth is Reason

“What is gun control? At its myopic optimistic best it may in rare instances offer a minuscule measure of ‘temporary’ safety. What is the right to keep and bear Arms? How could it be summarized? It is the first freedom to fall before the dictates of despots.” — Truth is Reason

“Some have made the argument, bordering on the frivolous, that only those arms in existence in the 18th century are protected by the Second Amendment. We do not interpret constitutional rights that way. Just as the First Amendment protects modern forms of communications … the Second Amendment extends, prima facie, to all instruments that constitute bearable arms, even those that were not in existence at the time of the founding.” — United States Supreme Court, District of Columbia v. Heller

“The most foolish mistake we could possibly make would be to allow the subject races to possess arms. History shows that all conquerors who have allowed their subject races to carry arms have prepared their own downfall by so doing.” — Adolf Hitler

“All political power comes from the barrel of a gun. The communist party must command all the guns, that way, no guns can ever be used to command the party.” — Mao Tse Tung

“The thought that average citizens will somehow be better able to successfully defend themselves more effectively than our nation’s trained professionals is absurd.” — Handgun Control, Inc. [What an idiotic statement.]

“If I could have banned them all …. I would have!” — Diane Feinstein

“No slaves shall keep any arms whatever, nor pass, unless with written orders from his master or employer, or in his company, with arms from one place to another.” — A Bill Concerning Slaves, 1785

“Gun Control? It’s the best thing you can do for crooks and gangsters. I want you to have nothing. If I’m a bad guy, I’m always gonna have a gun. Safety Locks? You will pull the trigger with a lock on, and I’ll pull the trigger. We’ll see who wins.” — Sammy “the Bull” Gravano

“I do not believe in people owning guns. Guns should be owned only by the police and military. I am going to do everything I can to disarm this state.” — Michael Dukakis

“Germans who wish to use firearms should join the SS or the SA – ordinary citizens don’t need guns, as their having guns doesn’t serve the State.” — Heinrich Himmler

“A system of licensing and registration is the perfect device to deny gun ownership to the bourgeoisie.” — Lenin

“We have to … just really brainwash people into thinking about guns in a vastly different way.” — Eric Holder